A joint thesis between the University of São Paulo (Brazil) and Université Paris-Sud (France).

Multi-agent systems (MASs) can be used to model phenomena that can be decomposed into several interacting agents which exist within an environment. In particular, they can be used to model human and animal societies, for the purpose of analysing their properties by computational means. This thesis is concerned with the automated analysis of a particular kind of such social models, namely, those based on behaviourist principles, which contrasts with the more dominant cognitive approaches found in the MAS literature. The hallmark of behaviourist theories is the emphasis on the definition of behaviour in terms of the interaction between agents and their environment. In this manner, not merely re exive actions, but also learning, drives, and emotions can be defined. More specifically, in this thesis we introduce a formal agent architecture (specified with the Z Notation) based on the Behaviour Analysis theory of B. F. Skinner, and provide a suitable formal notion of environment (based on the pi-calculus process algebra) to bring such agents together as an MAS. Simulation is often used to analyse MASs. The techniques involved typically consist in implementing and then simulating a MAS several times to either collect statistics or see what happens through animation. However, simulations can be used in a more verification-oriented manner if one considers that they are actually explorations of large state-spaces. In this thesis we propose a novel verification technique based on this insight, which consists in simulating a MAS in a guided way in order to check whether some hypothesis about it holds or not. To this end, we leverage the prominent position that environments have in the MASs of this thesis: the formal specification of the environment of a MAS serves to compute the possible evolutions of the MAS as a transition system, thereby establishing the state-space to be investigated. In this computation, agents are taken into account by being simulated in order to determine, at each environmental state, what their actions are. Each simulation execution is a sequence of states in this state-space, which is computed on-the-fly, as the simulation progresses. The hypothesis to be investigated, in turn, is given as another transition system, called a simulation purpose, which defines the desirable and undesirable simulations (e.g., “every time the agent does X, it will do Y later”). It is then possible to check whether the MAS satisfies the simulation purpose according to a number of precisely defined notions of satisfiability. Algorithmically, this corresponds to building a synchronous product of these two transitions systems (i.e., the MAS’s and the simulation purpose) on-the-fly and using it to operate a simulator. That is to say, the simulation purpose is used to guide the simulator, so that only the relevant states are actually simulated. By the end of such an algorithm, it delivers either a conclusive or an inconclusive verdict. If conclusive, it becomes known whether the MAS satisfies the simulation purpose with respect to the observations made during simulations. If inconclusive, it is possible to perform some adjustments and try again. In summary, then, in this thesis we provide four novel elements: (i) an agent architecture; (ii) a formal specification of the environment of these agents, so that they can be composed into an MAS; (iii) a structure to describe the property of interest, which we named simulation purpose; and (iv) a technique to formally analyse the resulting MAS with respect to a simulation purpose. These elements are implemented in a tool, called Formally Guided Simulator (FGS). Case studies executable in FGS are provided to illustrate the approach.

FGS, the main software product of the thesis, is available for download at my GitHub. 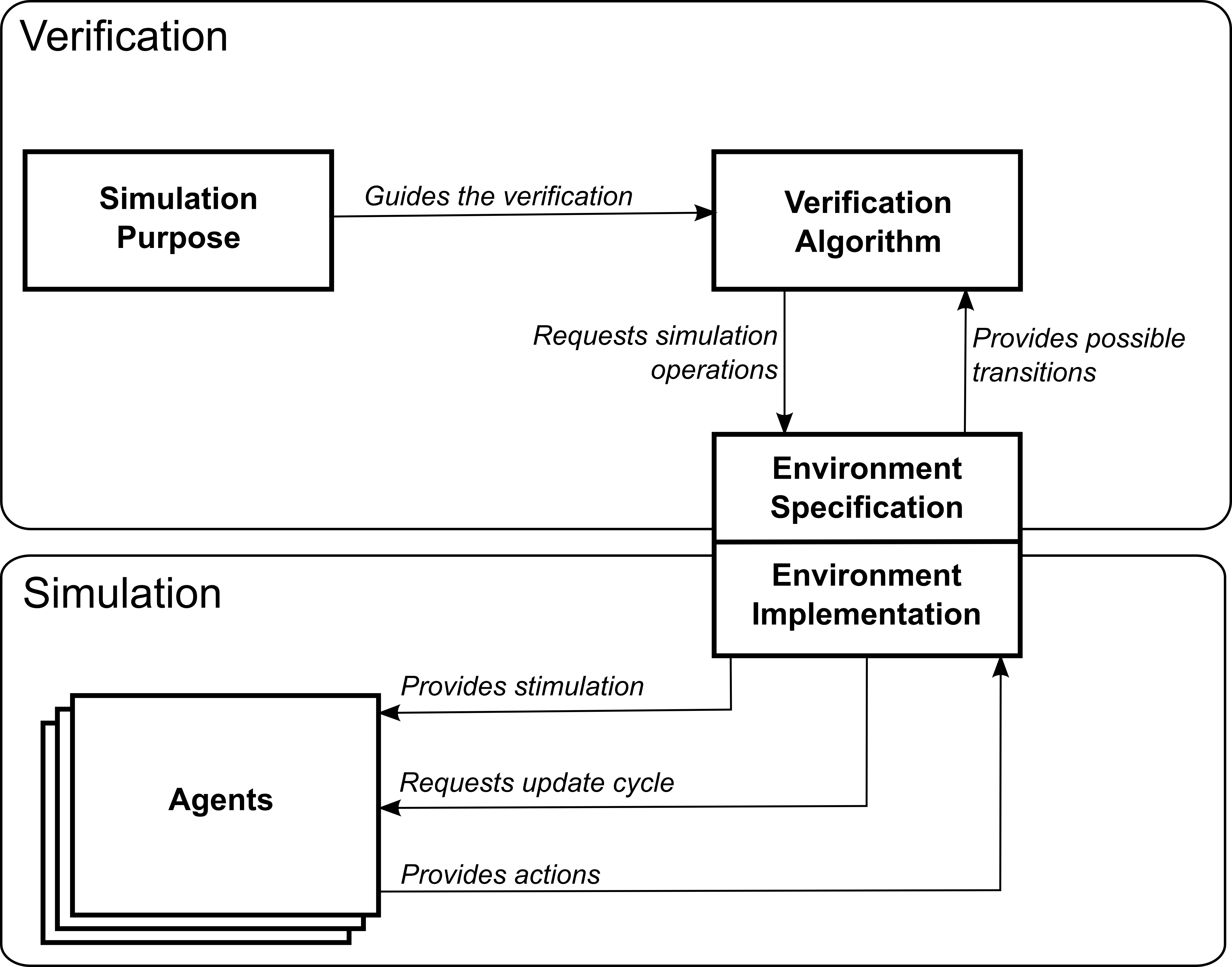 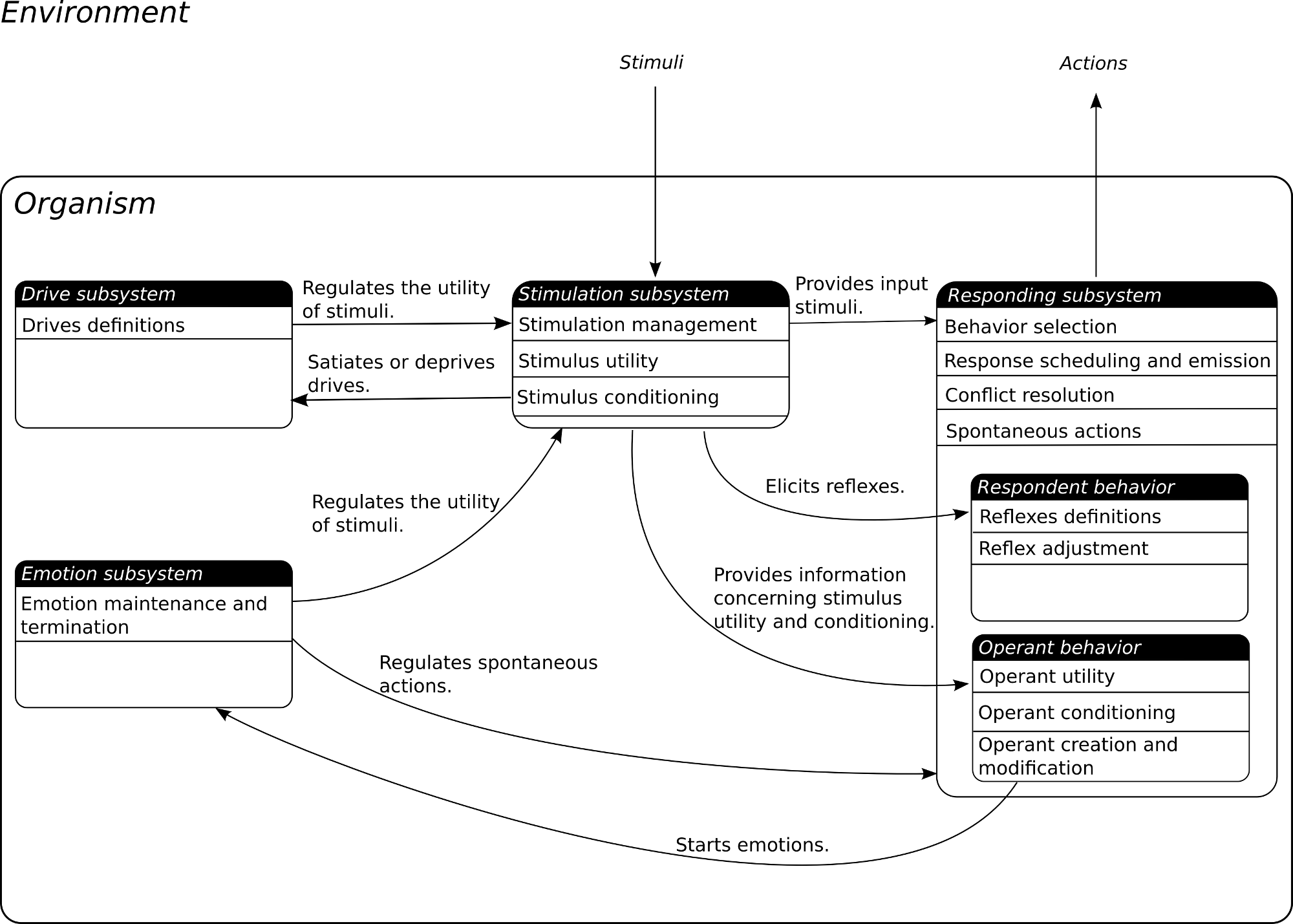