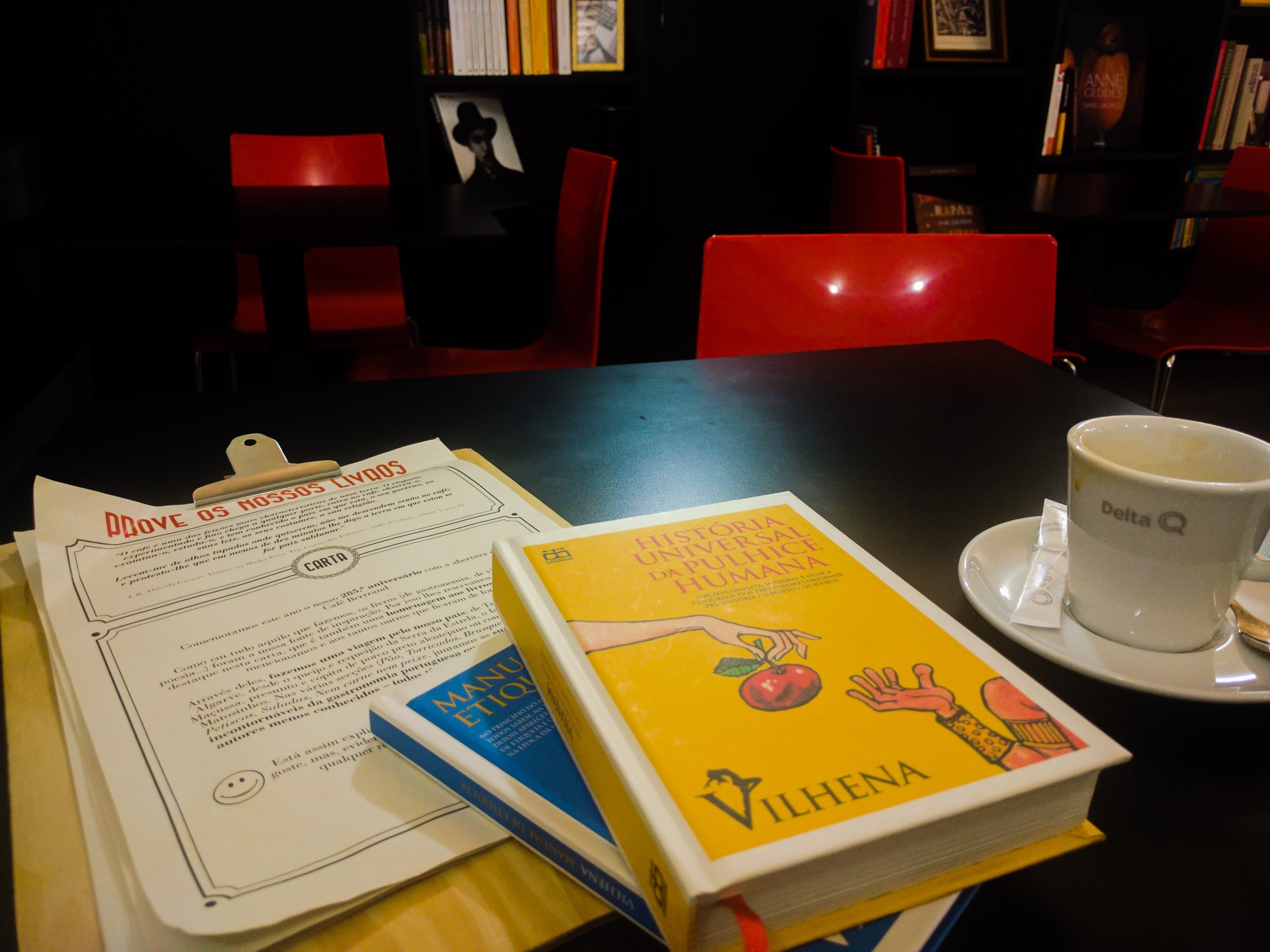 Last month I was in Lisbon to present a paper (PDF here) at a conference on Human-Computer Interaction, so I took the time to visit Bertrand‘s main store at Garret Street, a famous local bookshop regarded as the oldest operating in the world. History alone is of course a good reason to go there, but it is not the only one. Physical stores in general remain a great sensorial experience, if not always a convenient or economic one, and it is safe to assume that most online shoppers do miss the material interaction with goods.

One critical advantage of online bookshops is their personalization capability. For instance, a user who has bought books about Italian food may be interested in Greek food too, even though he or she never actually looked into it. In this manner, highly customized and relevant suggestions can be provided on an individual basis, contrary to the collective approach taken in a traditional store. This is often interpreted as equivalent to maximizing the overall quality of recommendations that users receive. Ultimately this may prove to be true, but I don’t think current technology is so advanced, despite the impressive relevance of recommendations one gets from Amazon and other online retailers.

For some years now I have noticed that visiting bookshops in different cities, particularly in different countries, allows for literary discoveries that would otherwise be entirely missed. This time, Bertrand’s carefully curated shelves taught me about José Vilhena, one of the greatest Portuguese satirists, whose texts seduced me in a few seconds, but that I had never heard about — neither from Amazon nor from anyone else. An extraordinary discovery as far as I am concerned. Needless to say, I bought some of his books at once. This was not the first time that Bertrand provided me with such discoveries, which is also why I keep coming back whenever I happen to be in Lisbon; a mechanism beyond mere chance is at work. It is amusing and instructive that they had just inaugurated a co-located coffee shop in which they invited customers to “taste their books.”

One can imagine a number of reasons why Bertrand and other excellent bookshops around the world have the extraordinary capability of  partly beating Amazon’s billion-dollar data analysis infrastructure. For instance:

Naturally, most of these characteristics can be transported to online environments. So why are they mostly absent there? Maybe in the rush to eliminate traditional disadvantages, they eliminated the advantages too. Maybe their present financial performance is so good that there is no pressure to really improve their algorithmic performance. Maybe current performance metrics are not really what I and other customers would like to optimize; in particular, popularity may be sure to bring profits, but certainly not wisdom. Maybe conceptual understanding of these principles is simply not sufficient. It is hard to say what the engineers behind these systems are thinking, so the latter point is especially interesting: surely it is fair to assume that some of these people are influenced by current themes and fashions. One such theme is the unreasonable effectiveness of data.

Enormous amounts of behavioral user data are certainly precious assets, but clearly insufficient to explore a user’s complete behavioral possibilities. After all, how can an algorithm recommend me Vilhena’s books if it has hardly seen any of its millions of customers buying it? In recent years it seems that this has been overlooked and many now think that so-called “big data” is all one really needs to learn about user behavior. However, I continue to be inclined to think that it is quality, not mere quantity, that really matters. Data is not always a commodity: much like the people generating it, data can be smart or dumb. My personal view is that sophisticated experimentation mechanisms can be a powerful way to collect high quality data. Smart data. That, however, is a topic of ongoing research beyond the scope of the present text.

I was fortunate enough to attend an incredibly relevant talk by Martijn Willemsen in the day right after my visit to Bertrand. There I learned that current technology for recommender systems is indeed quite imperfect as it ignores numerous aspects of human cognition. An example well-known by now is that quantity of choices does not always maximizes purchases — there is such a thing as the right amount. A less known fact, however, is that variety can improve user satisfaction, even at the cost of giving apparently inferior suggestions. A fascinating area, no doubt.

It is not always that a trip turns out to be so well-rounded. I guess it helps to keep looking for the right perspectives. Not only computers, but we too can benefit from experimenting with our immense world intelligently. Let us keep exploring.